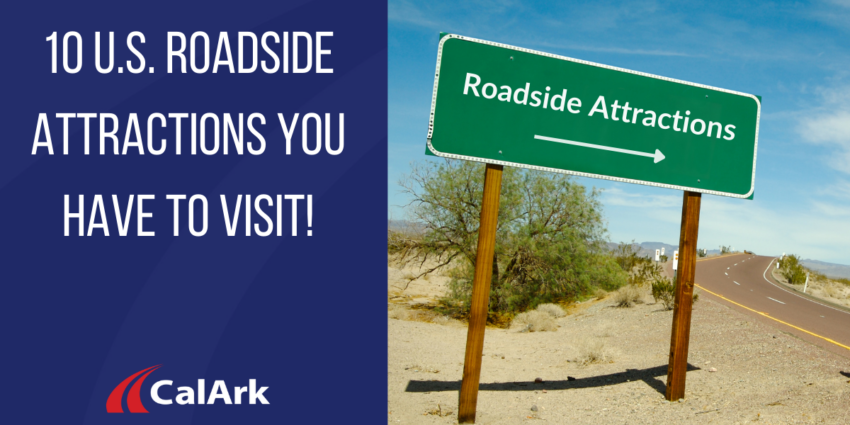 10 U.S. ROADSIDE ATTRACTIONS YOU HAVE TO VISIT

Ever see the signs for a roadside attraction as you’re driving and wonder if it’s worth the stop? We were wondering too! So much that we took a look at several around the country and compiled a list of our favorites. Some of these are perfect for putting a smile on your face as you drive by while others are great if you have a few hours to spare.

1. Cadillac Ranch - Amarillo, Texas
Standing just off I-40 west of Amarillo, Texas, Cadillac Ranch is an art installation built by a group of artists from San Francisco in the 1970s. It is still just as popular of a tourist spot today as it was back then. If you go, you’ll see ten Cadillacs buried nose-down in a field at the same angle as the Cheops Pyramid in Giza, Egypt. People come from all over the world to visit the site, either simply to view it or to contribute to the artwork.

2. Giant Santa - Evansville, Indiana
This 35-foot-tall Santa was built in 1974 as part of an “Enchanted World of Christmas” display at the Old Courthouse in Evansville. It was later moved to a park before standing at Busler’s Truck Stop for over 20 years. The truck stop was demo-ed in 2011, but Santa was fully restored in 2016. He now stands at 11812 US Hwy 41, just north of downtown Evansville.

3. Peachoid Water Tower - Gaffney, South Carolina
The Peachoid, known locally as “The Peach”, was built in 1980. It has a 7-ton, 60-foot-long leaf attached to one side and can hold one million gallons of water. While the water tower took 50 gallons of paint in 20 colors to make it look like the local peaches grown in the area, many people say that the it resembles a giant backside instead. See it for yourself! The giant peach is located on Interstate 85 between exits 90 and 92 in Gaffney, S.C.

4. The Great Fish - Atlanta, GeorgiaIf you’re passing through Atlanta on I-85, take exit 87 to see this 65-foot-long bronze fish statue. It sits in a comparatively small fountain next to the Atlanta Fish Market.

5. Christ of the Ozarks - Eureka Springs, Arkansas
Similar to the Christ the Redeemer statue in Brazil, Christ of the Ozarks is the fourth-biggest Jesus statue in the world and the largest in the United States. It stands at 67 feet tall, 65 feet wide and at an altitude of 1,500 feet. The statue is lit at night and is visible from a distance of 20 miles.

6. Bonnie and Clyde historical sites - Gibsland, Louisiana
A stop in Gibsland, La., is a must for true crime junkies. Gibsland is where the famed Bonnie and Clyde bought their breakfast the morning they died, just eight miles out of town. Here, you’ll get a chance to visit two different museums full of artifacts and souvenirs, as well as drive by the ambush site.

Admission is free. The museum is open every day with the exception of Thanksgiving, Christmas Day and New Year’s Day. There is free public parking onsite as well as parking for oversized vehicles. Public transportation is also available to and from the museum. Visit the RTA website for bus routes and park-and-ride info.

8. World’s Largest Office Chair - Anniston, Alabama
In 1981, Leonard “Sonny” Miller, owner of Miller’s Office Supply, had the idea to build the world’s largest chair in the vacant lot next door. He used one of his company’s office chairs as the model and converted the inches into feet. The result was a 33-foot-tall chair with a 15-foot square seat built from 10 tons of steel, which received the honor of the World’s Largest Chair in 1982.

9. Graceland - Memphis, Tennessee
A trip through Memphis, Tenn., is not complete without a stop at Graceland, the home of Elvis Presley. Wander through his mansion, see the classic cars, the iconic jumpsuits and interactive exhibits to learn more about the King of Rock ’n Roll.

Parking is $10 for standard vehicles and $15 for oversized vehicles including semi-trucks.

10. Trucking Museum at World’s Largest Truck Stop - Walcott, Iowa
The Iowa 80 Trucking Museum is a great collection of vintage trucks, antique trucking memorabilia, a movie theater showing films about trucking history, and more. It’s open every day during the rummer and Wednesday through Sunday the rest of the year. Admission is free, but donations are welcome.

The #truckerlife can really take you anywhere! Where will CalArk take you? Give us a call today to join the team.